I stayed in Leh for a week. Everyday was the same. Camera shy Sonam Uncle used to wake up at 7 and do his daily prayer. I would wake up to suffocating smoke. It used to be the incense that uncle lit every morning. Like us, they don’t light one or two incense sticks, instead they light up a whole bunch of them. The incense also doesn’t have a particularly pleasant smell.. Its just smoke. It took a couple of days of getting used to. Dolma aunty used to wake up at 9 am and go straight to the kitchen. Can you imagine if we people had the luxury of waking at 9! Even housewives in the cities don’t have that luxury. Padma, Dolma aunty’s youngest daughter and I, used to lay awake watching Chota Bheem or Doremon until aunty would come with breakfast. She is 10 and studies in class 5. The rest of the day was spent visiting relatives, helping Padma do her holiday homework, watching TV, strolling around the city. The day ended around 5pm. The streets would be completely deserted by 6pm. Evenings were spent watching DD Leh, a 1 hour program and then Karan-Arjun kinda movies. Padma and I mostly spent the evening dancing away to Ladakhi and Tibetan songs. Dinner was usually between 8-9. We would be off to bed by 11.30. 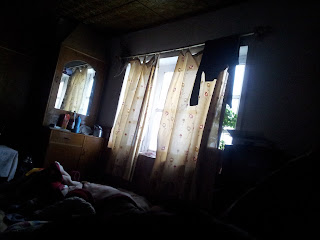 Lazy 10 am in the morning inside 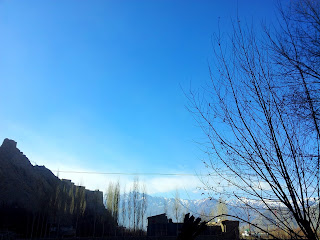 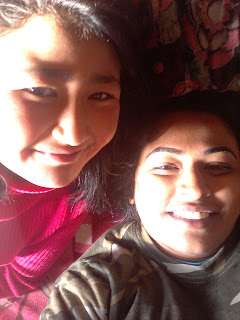 
In Ladakh, bathing, brushing etc, are not on the priority list in any season. Breakfast was had sitting in the razai, roti in hand with old mango pickle in it, sharing a bowl of previous night’s dal with Padma. Minimal use of utensils is a priority. There are no maids there and Dolma aunty has to do all the washing. There was this one time when I accompanied aunty to the kitchen with plates and tea cups one evening. She was washing them while we chatted. It so happened that she forgot to wipe them dry and left several of the damp plates on the surface. After about 5 mins she realized what had happened, I didn't understand what was happening until I saw her wedge them out with a steel spatula as they had frozen stuck to the stone surface. 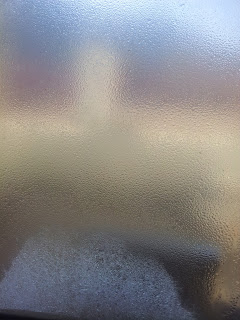 Frost on the window every morning 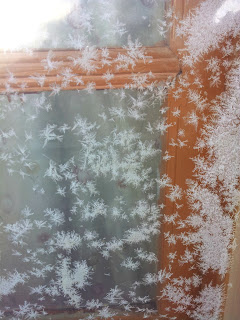 Icicles on the window.. had never seem them shaped like this. Always thought cartoons exaggerated them.


New Year’s night was spent watching a special 1 hour program of DD Leh, the whole hour 10 to 11 (I think) was in Ladakhi. It showed the year gone by in Ladakh- The booming tourism, The Leh festival in Sep, Hemis festival, Losar among others. We had to sleep by 11.30 pm because the power was out and it was pitch dark to do anything else. The entire city was also asleep by then.

What surprised me was the continuous power supply, so i enquired about it. Electricity to Leh is usually supplied by a giant generator located bang in the middle of the city. Power was supplied only from 6 to 11pm everyday in summer. But in winter this time, there was power all through the day, leaving of course, minor power outages. I was told that a new Hydel power plant had been set up on the Zanskar. No sooner had I asked the question, the power went out and didn't return till the next evening. Rinchen informed us that the Zanskar had frozen! Problems that can arise only in Ladakh..

Rinchen is Sonam uncle’s brother. He is the go to guy for vacationing in Leh. You only need to tell him the places you want to visit and bham! Everything is ready. Extremely sweet guy, he visited everyday and gave me company lest I should get bored.


On one of the days I accompanied Padma to the skating rink. Ice hockey and ice skating are very big in Leh. Ice hockey tournament is held here annually and teams from the armed forces and other countries also participate. 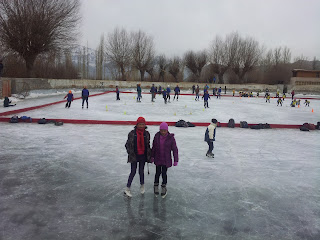 Padma and her friend skating


Of the 7 days that I stayed on Leh, my birthday celebrations lasted 4 days. On 3rd Jan, we had chocolate and strawberry pastries that we bought from a local bakery. On my actual birthday – 4th, I went and bought Aloo Tikkis, apparently they are aunty’s favourite and Jalebis. Yes, you get the famous dilli ki chaat in Leh throughout the year. 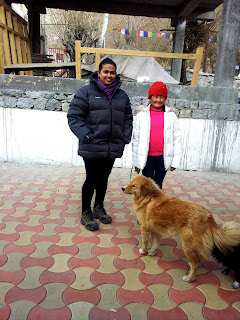 Me and Padma all geared up 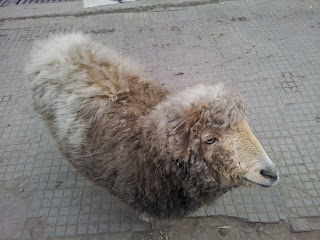 
Aunty made her special Momos for dinner. The momos were made in typical ladakhi style out of wheat flour and were stuffed with all available veggies and paneer. On the third day aunty made chicken. Though I am a vegetarian, uncle insisted that Veg Momos was not a dish fit for birthday celebration and a non-veg dish should be made. Being a flexible vegiesaurus I agreed to have the gravy of the chicken dish, which as it turned out was the dal of the previous night :-)

The next day, Padma tried freezing a mixture of milkmaid and milk in an ice tray in the FRIDGE! She wanted to make ice cream for my birthday. The mixture did not freeze inspite of being in the fridge the whole day. Disheartened, Padma agreed to have it as it is for dessert after dinner. But by the time the ice tray made the journey from the fridge in the kitchen to the living room, it had frozen. We had milk ice cubes with toothpicks sticking out of them :-) 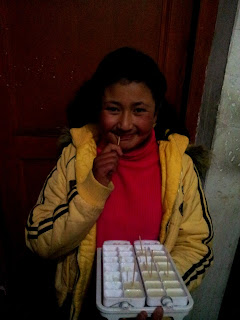 Padma with her ice tray ice-cream

Although I had decided not to take a bath, eventually I decided to have one for experimental purpose. So, I did bathe. Aunty heated the water with an immersion rod and it was surprisingly pleasant. Only problem was it became freezing cold by the time it hit my feet. Aunty warned me not to step outside with wet hair or they would freeze. Trying to be a daredevil I stepped out to hang my towel for drying and freeze they did! Tiny icicles formed all over my head. I tried clicking them but my camera could not focus. It was fun scrunching and crushing the icicles.. only to find icicle and hair pieces in my hand! 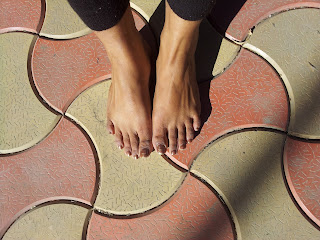 frozen feet after bathing.. trust me they were looking blueish :-P

All in all, it was a trip like never before. I was completely alone but was never alone or lonely to the point that for 2 days I forgot to call up home. The family was so loving and caring that I did not miss mine even for a minute. I have travelled to many places, but have always remained a tourist, here I was at home. 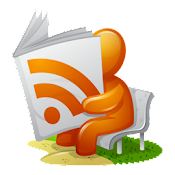 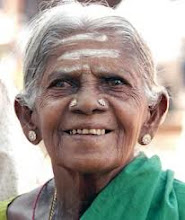 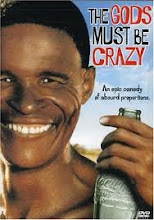